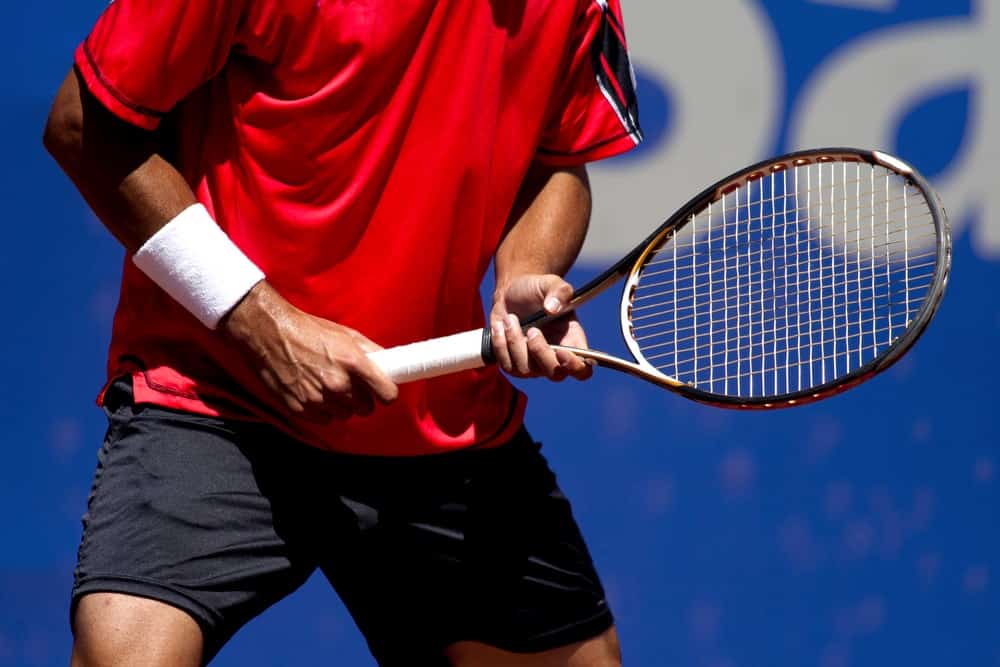 The majority of tennis rackets are manufactured in Asia with Japan as the leading country in tennis racket production. The best types are those that have no strings because professional players prefer to have a choice on the strings to use them with. A tennis racket played by adults weighs 12.5 ounces while those children use weigh 6 ounces.

Wooden rackets weighed an average of 350 grams and were used from the 15th century until 1965. Professional players preferred them to steel frame rackets, not knowing that the latter was much more superior.

Related: What to Wear for Tennis (Men and Women) | Tennis vs. Squash – What’s Better?

This is a tennis racket from Dunlop which is endorsed by Kevin Anderson. Kevin Anderson is a South African professional tennis player who is currently world number 7. The racket fits perfectly into his gameplay with his need for control precision the Srixon delivers just that.

The CX has a 95 square inches head size that does not provide much room for error. The racket comes unstrung so a person can use the choice of string that they deem appropriate for an additional cost. When properly strung, the head will have a dense 18 by 20 string pattern that has a tension of 55 pounds.

The frame is made using a combination of sonic core and graphite which provides a great level of stability and strength.

The composition makes the racket weigh 330 grams. The frame is 27 inches in length has a classic leather strip around the handle to provide a better grip for the user and also to absorb some of the vibrations. It works better with more advanced players because its relatively small size provides for better acceleration.

There are several variations of the Dunlop CX which all go for $225 in some online stores. The racket may be slightly hard to find in some shops since the Srixon is an Asian brand.


This is a racket that was used by the current top seed Rafael Nadal. Nadal has been using the Babolat pure Aero which was designed specifically for him since 2004. The Babolat la Decima was released by Babolat in commemoration of his 10th French Open title, and this is one of the most popular tennis rackets in the market.

The racket is engraved with each of the dates of Nadal’s win along with its frame.

The racket has a 100 square inch head which is woven with 16 by 19 strings with a string tension of up to 60 pounds, the strings of the racket have grommet holes that absorb a lot of the shock and provide better ball control when hitting the ball on the return.

The frame is made of graphite and is light only weighing 317 grams (11.3 oz.). The yellow and orange color of the racket symbolizes Nadal’s traditional AeroPro drive and the Parisian clay where he has now conquered 10 times.

The racket is built to facilitate more aggressive ball serves and its frame provides for more handle to generate more powers on the swing. These features make the Babolat La Decima ideal for both skilled intermediates and also professionals since it’s packed with both power and spin.

This is a limited edition racket and for some tennis enthusiast it qualifies to be a collector’s item and it can be found online going for approximately $230.


The Head MxG 5 is a starter racket that better serves the beginners and intermediate level players. The MxG has a 105 square inch head size that ensures a player gets a clean contact with the ball. In addition, its 16 by 18 black widow string pattern provides better ball control.

The frame of the MxG 5 is made from a combination of graphite and magnesium, thereby making it stable and durable. The light composition of the frame makes the racket weigh 10.3 ounces. A light racket is a player’s delight and nightmare.

It is a delight when it is coupled up with its bigger 28-inch length that will provide them with a better swinging speed that provides more power and is also easy on the arm. It is a nightmare when the opponent’s serve a strong ball which will send terrible vibrations through your racket to your hand, but the Head MxG 5 uses Head Ultimate technology to provide a better grip and absorption of vibrations.

The Head MxG 5 tennis racket is currently going for $240.


The Yonex Astrel 105 is crafted for the beginners and intermediated to those who desire a light playing option. The racket was built for maneuverability, power, and comfort. It comes with a big head size measuring 105 square inches to ensure that you get enough contact and power on the ball with each hit.

The head is in an isometric shape woven with 16 by 18 hybrid strings that can handle string tension of up to 55 pounds. The white and blue frame of the racket is made from HM graphite and the light material weighing approximately 290 grams (10.2 oz.), thereby making it light, easy on the arm, and ideal for an easy swing.

This racket makes use of Ergo power grip which means that the handle is thicker toward the bottom and thinner at the top to facilitate a powerful grip during gameplay. The handle is covered with Yonex synthetic for a better grip and makes use of Quake shut gel plus that aids in the absorption of vibrations at the handle to facilitate a smooth hitting experience. The racket is available on Amazon for $250.


This is another great racket developed by Wilson and endorsed by one of the greatest athletes of all time and 23-time grand slam champion Serena Williams. The Serena Williams 104 is Serena’s personal gaming racket and it sacrifices a lot of other features to provide raw power.

This is proof that the racket was built to match the aggressive play which Serena plays. As a female athlete, not only does Serena use different techniques but she also infuses some enormous amounts of raw power during each serves to beat her opponents.

The SW104 gets its name from its big head size measuring 104 square inches. The large head size provides sufficient contact with the ball while the dense string patterns provide ball control. The frame of the racket provides a 28-inch length, the extended length gives each swing a lot of power if used by a person with enormous strength.

The handle contains countervail which is a shock-absorbing carbon fiber to provide a smooth swing. The racket is relatively light, weighing up to 12 oz., and is therefore ideal for a standard professional.

The Wilson Blade SW104 is available in various stores at only $250. This is a bargain for this powerful racket.


This is the official tennis racket used by the current world number 2 and 20-time grand slam champion Roger Federer. The pro 97 racket is made by Wilson in close collaboration with Federer and he has been using the racket since the 2014 season.

The RF97 2018 brings back the same specs and playability as its predecessor, The RF97A Black, but with a hint of simplicity and elegance. The racket is built to deliver a combination of power and surgical precision for any professional that chooses to use it.

The RF 97A has a head size of 97 square inches and it uses Champion’s choice strings with a string tension of up to 60 pounds. The handle is equipped with a Wilson premium leather to help deliver the best grip and help with the absorption of the vibrations.

The frame is made of graphite braided with aramid to deliver light equipment that weighs approximately 360 grams (12.6 oz.) and is relatively fast on the swing. Along with its frame, the racket bears a laser engraved Rodger Federer signature.

Various variations of the RF97 exist in the market, but the Rodger Federer Autograph (RF97A) is the most expensive as it is currently retailing for $270.

This is the most expensive playing racket there is in the market made by Bosworth Tennis, a family-owned company, in collaboration with the game’s greatest athletes. The performance of the racket is attributable to over 30 years of continuous racket testing, design, and feedback.

The Tour 96 has a unique 10-sided head that makes it stand out among other rackets in the industry. It is crafted by hand and weighs approximately 345 grams. Bosworth produces only custom rackets meaning that they make rackets according to an individual’s taste, preference, and performance needs, thus delivering top-quality equipment.

The tennis rackets from Bosworth are customized using their 10-point performance fitting system (racket weight, grip, string tension, balance, racket size, etc.) to achieve the best performance from the user, thereby making it a lethal weapon to have on the clay court.

Bosworth does not invest in making a large variety of rackets but rather they choose to use their trademark 10-sided head to make a personalized racket for all their customers whether they are a touring pro or just a standard professional.

The tennis racket comes in a wide variety of colors and they are available from the Bosworth website and other various sites for only $400.

Boris Becker is a former world number 1 professional tennis player. He partnered with PUMA after Adidas failed to meet his racket requirements. The L3 racket was produced in 1995 following Becker’s triumph in the 1995 world championship in Frankfurt, and only 3100 pieces of this magnificent racket were ever made.

The racket is 27 inches in length and has a 92 square inch head woven with a 16 by 19 string pattern which makes the classic puma trademark logo at the center of the racket’s head. The frame is composed of 50% graphite and 50% Kevlar making it weigh approximately 350 grams. On the inside of the frame, it has an engraving of the 1995 win in Frankfurt, and also it has its production serial number out of the 3100.

The racket comes in a wooden box that contains the life story of Mr. Becker and signed with his original signature. It is a proper collector’s item for tennis lovers with a refined taste and is available in several online stores for $800 in mint condition. Meanwhile, you can also get a second-hand one online ranging between $250 and $500.

The second most expensive racket is from an unexpected source. In early January, Chanel launched its line of new sports equipment.

The racket comes strung with the trademark Chanel logo of the interlocking CC at the center of its head. The racket comes with an elegant black Chanel racket bag with a shoulder strap. It is no secret that any Chanel product doesn’t come cheap, so if you are thinking of acquiring one, then it will set you back by a whopping $1,800. Several customization options that may bring the figure even higher.

This tennis racket is not a gaming racket but actually a tournament trophy. The racket is made of pure gold and it takes the shape of a regular racket, but it has a tennis ball-like figure attached to the strings which are studded with more than 1700 real diamond stones worth over $50,000. The Proximus game prize weighs roughly 8.8 pounds (4 kgs).

The Diamond Games were organized in Antwerp, Belgium and the first tennis game was in February 2002. Any of the female contestants would be awarded the prize by winning the tournament a total of 3 times in 5 years.

The Proximus game prize has only been won once in the tournament’s history by Amelie Mauresmo, the current holder, from France who won it in February 2007 after beating Kim Clijsters. That win marked her 3rd win in a row. The Games no longer exist and the last tournament was played in February 2008, meaning that there would be no more rackets of this kind.

The current market value of the racket is approximately 1.3 million dollars and is undoubtedly the most expensive tennis racket that exists in our lifetime. 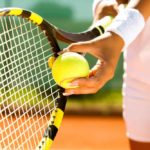